Vice President Faisal Naseem visited the National Thalassemia Centre today. The Vice President met with members of the administration and senior officials of the center, and observed several functions of the daily operations.

During the meeting held at the Thalassemia Center, the senior officials briefed the Vice President on the challenges faced at the center, primarily due to the shortage of space and lack of resources, infrastructure and equipment.

The Vice President noted that the Health Sector is a key focal point of attention for the President and government, and ensured that the Government would take necessary action to address the issues and concerns raised after discussing with the relevant institutions.

The Vice President also met and spoke to some patients during the visit to the Thalassemia Center. 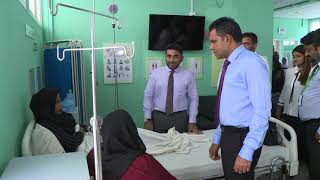