President Ibrahim Mohamed Solih resolves to implement policies that will establish an atmosphere conducive to the success of Small and Medium Enterprises (SMEs), upon the unanimous advice of his cabinet of ministers and after reviewing a paper submitted on the topic by the Ministry of Economic Affairs and Development. Action on this matter will encompass both the passage of legislation and the implementation of executive actions, that will remove many of the burdens on these businesses and help them thrive.

This will entail the reform of tax regulations for the benefit of such entities, exempting them from cumbersome duties and bureaucratic procedures detrimental to business; improving the quality of services provided to them by government and state-owned enterprises; and according higher priority to SMEs when the government announces project bids that involve less than 2.5 million rufiyaa.

It is the firm belief of this administration that small and medium business enterprises comprise an important part of the backbone of the nation’s commerce. By creating a business-regime conducive to their success, it will not only benefit those who are directly involved in running them, but it will also benefit our citizenry as a whole, buoyed by a flourishing economy. 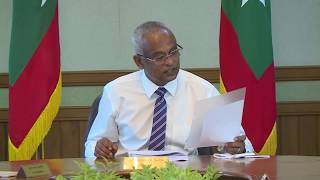