The President congratulates the new Speaker of the People’s Majlis President Ibrahim Mohamed Solih has met with and congratulated Mr. Mohamed Nasheed, the new Speaker, of the People’s Majlis. The meeting was held tonight at the President’s Office.

During the meeting, the President expressed that the new Constitution was through the hard work of many people and it has high expectation of them. Also, he said the duties of the Speaker are very important and expressed his confidence that he would carry his work smoothly and fairly. Additionally, he assured that the government would extend its full cooperation to the Majlis. 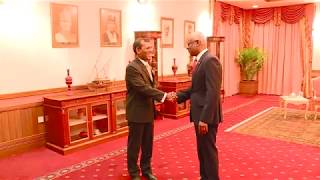