President Ibrahim Mohamed Solih has met with the members of Thoddoo Island Council this afternoon at The President’s Office and discussed the priorities and concerns raised by the Island’s residents, as well as various development projects the council members have proposed for the benefit of their constituents.

Moreover, the Council members also emphasized that they need a place to store and sell their agricultural items in Male’ that they have planted especially for the upcoming Ramadan month.

Following the meeting, the Council members gifted watermelons to the President that the island’s farmers have planted for this year’s Ramadan month.

The President expressed that the government would take necessary action after discussing with the relevant institutions and addresses the specific issues and concerns raised by members of the Thoddoo Island Council. 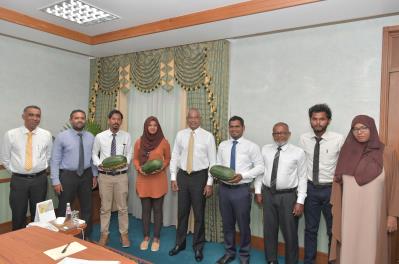 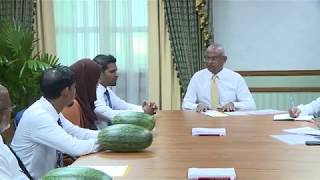