A skilled, talented, and capable society is the most important asset a country needs for progress - Vice President Vice President Faisal Naseem has stated that the progress of a nation and the path for development is, through building an educated populace and a skilled, talented, and capable society is the most important asset a country needs for progress. The Vice President made this remark while speaking at the graduation ceremony of Maldives Polytechnic held this tonight at Islamic University of Maldives hall.

Speaking at the ceremony, the Vice President emphasized that this administration accords the highest priority to train professionals in the fields with the most pressing needs for human resources. He also assured that the current administration will put in every effort to achieve this.

Speaking in this regard, the Vice President urged all industry leaders to match tonight’s graduates’ full potential in the employment environment and to facilitate them with the most suitable jobs. He also called upon industry leader’s to provide opportunities to citizens and appropriate salary increments, and job promotion without discrimination.

Speaking at the ceremony, the Vice President noted that national development is on the hand of the community and he stated that development and success cannot be achieved without the effort of the citizen.

At the ceremony, Vice President awarded the trophy to the top achievers from the course.

During the ceremony, the Vice President noted that the Maldives strongly condemns today's incident in Sri Lanka, such acts of terror and violence against innocent people. Also highlighted that the Maldives will stand ready to do all that we can to assist Sri Lanka in its hour of grief. He also noted that this county will be fully committed to continue working with our international partners in the fight against terrorism. 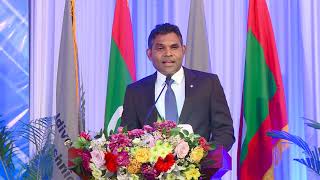