President Solih meets with the members of Nolhivaram Island Council President Ibrahim Mohamed Solih has this afternoon met with members of the Nolhivaram Island Council of South Thiladhunmathi Atoll.

In this regard, council members noted the concerns of Island’s community regarding current harbour. Also, they highlighted the challenges being faced due to the lack of a waste management mechanism. Moreover, they noted the requirements of a women area at the mosques on the island. In addition, they spoke on the need to provide sporting facilities on the island targeted for the youth population.

During the meeting, President Solih stated that the government would take necessary action after discussing with the line ministries and tackle these problems. 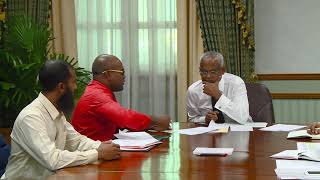