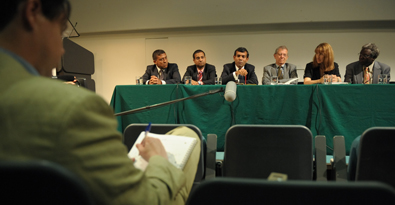 Speaking at a press conference at the World Forum on Enterprise and the Environment in Keble College, Oxford, on Sunday morning, the President cautioned that climate change is not only problem for the Maldives:

"What happens to the Maldives today, will happen to Britain tomorrow. If the world cannot save the Maldives from the affects of climate change we won't be able to save the rest of the world either," the President said.

The President further stated that the climate crisis is not merely "an environmental or scientific problem. It is also a security and a human rights problem."

"There is no greater security threat than that of climate change, which threatens to wipe nations off the face of the Earth," the President told an audience of around fifty journalists.

The President appealed for assistance funds for the Maldives to help the country adapt to future sea level rise. "We need assistance for adaptation measures such as sea walls, revetments and breakwaters. And we also need assistance for the consolidation of democracy in the Maldives, so the government is able to listen to and effectively respond to the concerns of local people," he said.

The President was joined at the press conference by Professor Sir David King - one of Britain's top academics on climate change and the environment.

Professor King praised the Maldives' environmental policies. Professor King noted that, although only a small country, the Maldives is leading the world on climate change, which he said would be the 21st Century's most important political issue.