President Ibrahim Mohamed Solih on Tuesday echoed the administration’s commitment to decentralised development, entailing ease of access to public services in every region interconnected with a high-speed transportation network. He made the remarks at a meeting with the residential community of Manadhoo Island, South Miladhunmadulu Atoll.

At the town hall meeting, the residents conveyed to the President their vision and concerns regarding the development of the island. They spoke about renewable energy, road development, remedying the sewerage network, housing needs, and the development of a local market to promote economic growth and improve the healthcare sector.

President Solih discussed the developmental plans for Manadhoo Island and detailed the administration’s approach towards development. On the housing front, he stressed the need to improve public services outside of the Greater Malé Region to minimise migration to the capital city. The President and members of his delegation also spoke in-depth about the administration-led "Integrated National Public Ferry Network" project, which would introduce efficient, affordable, convenient, and sustainable passenger and cargo ferry services across the country.

The President’s visit to Manadhoo Island is the third leg of his two-day tour of the South Miladhunmadulu Atoll. He is accompanied on the visit by some members of his Cabinet and senior government officials. 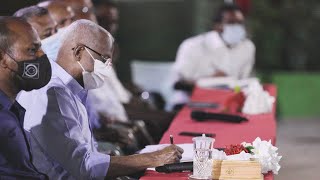